“I don’t believe in poetry,” Brittany Perham wrote in her first book, The Curiosities (Parlor Press, 2012). “This might be the last poem.”

According to Perham’s example, then, belief in poetry is not a necessary condition for the existence of poetry – even for the writing of it. One can be mired in doubt and still muster the courage to put pen to paper. After reading Double Portrait, I would take this claim – that poetry requires no belief in its worth – even further: Perham’s new poems suggest that any conviction in poetry as poetry would actually work against the art. Belief in poetry as

such or herself as poet would hinder the essential honesty that arises when the grip on such categories and identifications is released.

“Today I am not vomiting blood,” the book begins. “Tomorrow I could be vomiting blood.” Many of Perham’s lines work like this: terse, formulated, rational claims about a state of affairs. And in this restraint, a complex, heart-wrenching condition is expressed. This first poem (a ghazal in a book rife with these and other incantatory forms), continues:

It doesn’t matter how I feel, or felt,

about someone once he’s vomiting blood.

This is how I know the villain and the tragic hero

are the same man: he’s the one vomiting blood.

Tonight with my warm feelings I try to keep him alive

thinking, from far away, no more vomiting blood.

It’s time to say I love you and mean it

to the man who’s vomiting blood. 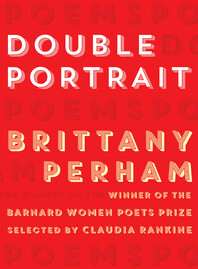 The time to express love is the moment around which many of these poems center. Indeed, in Perham’s world there is no other real reason for speaking. For Perham, there is no self without the other; every portrait of herself is a portrait of another. In this sense, Perham’s poetry is deeply political, if we take “political” to mean the self’s essential navigation among others, to mean the space between freedom and obligation. These are courageous themes in an era that so emphasizes identity and personal freedom.

These poems speak from the vulnerability that surfaces when we realize love and independence are not in any way guaranteed. Every person is essentially intertwined in her larger community of relationships and roles in which she inhabits – the “I” that is “We” and “We” that is “I,” as Hegel puts it. We must treat each other with care, the book seems to argue, because the world is indifferent to us. Rife with brute particulars, some painful, some funny, and many absurd, the world of Double Portrait shows us floundering in this multitude of contingency:

One of us went to podcasts

One of us was male, male

One of us went to dramas, hoopskirts, and carriages

Through these poems, we readers have the opportunity to empathize in many different directions: toward the speaker, toward the spoken to, the beloved and the lover, the child and the parent.

Perham’s verses bring vulnerabilities to light, and that is what makes these poems love poems in the truest sense, surprising those of us who may have come to believe the love poem is a dead thing.

I can always, day or night or three a.m., call you

up so you can chant the You-Are-Not-Alone

Chant, which goes, ad infinitum, “You-

Are-Not-Alone.” If you think this isn’t a love

poem, think again. This one’s for you,

ad infinitum, for you.

Perham has resurrected the love poem and reinvented it. It now has ample room for absurdity, disbelief, and the political. We care for each other because the world will not – and that is love. No one is unaffected by another person, no one is unscathed – and that is also love.

Natalie Shapero’s Hard Child (Copper Canyon, 2017) is also a second collection, and also a portraiture of plurality. Shapero, critiquing the particular conditions and alienations of our time, uses her own life as an American, as an intellectual, and as a new mother as case study:

To be … American, is to find you have lived

your whole small life on the back of some

starving and saber-toothed creature that has,

Where for Perham the necessary condition for any critique of the political is a recognition of our essential dependence on one another – and poetry is worthwhile only to the extent that it truthfully discloses this love and obligation – for Shapero the necessary condition for critique is her own conscience as an American poet. Shapero portrays herself as a hard child all grown up who, herself, has just given birth. Being human, Shapero suggests, is to always be a bit infantile, and she’s willing to self-incriminate:

What pride I feel in America stems from our anthem

being the toughest one to sing. The high segment

with the red burn of the rocket: only a few

After attempting the anthem, upward of fifty

percent remark, I should have started lower or I should

have chosen something else instead. Uneasy lies the head.

Where Perham gives us a gallery of double portraits wherein we can see our own reflections in each protective glass, Shapero gives us a double-sided mirror. Sometimes we see through to glimpse Shapero’s daily life and thoughts; other times we see ourselves with all our hangups, our rationality and our physicality, our sensitivity and our violence.

I revere all variants

form, save for my own.

My mind has made

an enemy of my body;

it’s all I can do

not to quote Kissinger

War: A PITY THEY

Shapero tests any assumption that we can find stability in who we take ourselves to be. This is a courageous claim, especially now, when, newly challenged in our old assumptions about who we are as a society, it is tempting to cling to any identification that lends our lives meaning – being a poet, or a woman, or a liberal, for example. Yet these collections shirk such reductive identifications and show how doubt over certainty and humor over self-assurance can be sources of comfort. They even might lend us back our humanity.

Sarah V. Schweig is the author of Take Nothing with You (University of Iowa Press, 2016). Her poems have appeared in BOMB, Boston Review, Iowa Review, Tin House, The Volta, and elsewhere. Her reviews have appeared in Fanzine, Gulf Coast, and Publishers Weekly.